Theatre of the absurd : Pirandello: Six characters in search of an author 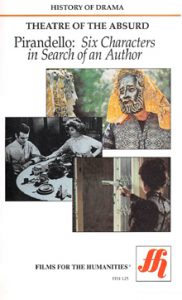 Brings to light the struggle to define reality evidenced in the theater-of-the-absurd drama of Luigi Pirandello. Focuses on his play Six Characters in Search of an Author, in which the distinguishing line between acting and being continually vanishes and reappears in a simulacrum of life, seen by Pirandello as an endless comedy of illusion because he believed all real-life roles to be disguises.