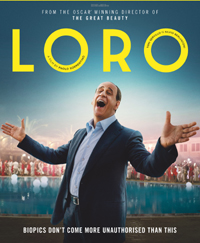 Loro is a 2019 drama film directed by Paolo Sorrentino, starring Toni Servillo. The film talks about the group of businessmen and politicians – the Loro (Them) from the title – who live and act near to media tycoon and politician Silvio Berlusconi.  Even before he shows up onscreen, about 20 minutes into “Loro,” Silvio Berlusconi is the center of attention. His face is tattooed on a woman’s lower back, and he is talked about constantly, though rarely by name. When people say “him,” chances are they mean, well, him, and to dispel any ambiguity they sometimes double up the masculine pronoun. The prime minister of Italy for most of the 1990s and early 2000s (and currently a member of the European Parliament) is twice the man anyone else could hope to be: he’s “him him.”

Berlusconi, played with shrewd calculation, gleeful abandon and plasticized hair by Toni Servillo, dominates everyone in the movie with his energetic pursuit of power and pleasure. The film’s director, Paolo Sorrentino, himself seems to have surrendered to the so-called presidente and his curious brand of charisma. The satirical and skeptical notes in this symphony of lust and corruption are drowned out after a while, and queasy fascination melts into a kind of affectionate, exhausted awe. In trying to explore just what made this guy irresistible, Sorrentino conquers whatever resistance he himself might have had. Berlusconi is lecherous, vulgar and dishonest, but somehow impossible not to love.

Our guide, for a while, is Sergio Morra (Riccardo Scamarcio), a handsome young climber with enough sensitivity in his features to make us trust him at least a little.  Sergio’s plan is to join the ranks of procurers who bring young women to Berlusconi’s attention. In exchange, he hopes for a low-level political appointment that will bring in some money.  Sergio is quickly upstaged by the prime minister himself, who is in a temporary Napoleonic exile in Sardinia.  Berlusconi pontificates, sings sentimental songs, sweet-talks and browbeats political rivals and allies, and generally behaves like a guy having the time of his life. Occasionally a note of wistfulness or melancholy slips into his monologues, but real regret and deep introspection are alien to his character. He’s a salesman, a showman, a ladies man, a man of the people.  In any case, the film regards Berlusconi’s sexual appetite with tender indulgence. Which is also how it treats his scheming and double-dealing.  As a result, the film is warm and soft, which makes it either startling in its sincerity or horrifying in its cynicism. Either way, it might be a portent of things to come, as filmmakers try to frame the legacies of leaders who succeed through shamelessness.