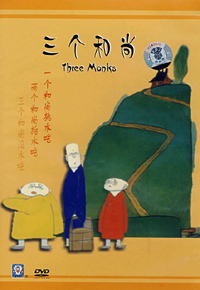 Three Monks is a Chinese animated short film produced by the Shanghai Animation Film Studio (SAFS).  A young monk lives a simple life on a hilltop Buddhist temple. He has one daily task of hauling two buckets of water up the hill using a carrying pole. One day, a skinny monk arrives. The young monk tries to share the job with the skinny monk, but the carry pole is only long enough for one bucket. They therefore decide to carry one bucket in the center of the pole, together. However, when they go up and down hill, the bucket shifts from one end to another. The weight ends up unevenly distributed, and the two monks end up in an argument. The problem is settled when the two monks measure the exact center of the pole and keep the bucket in position. A few days later, a fat monk joins them. The fat monk drinks all the water upon his arrival, and is told to fetch more water by himself. The fat monk brings up more water, but once again drinks it all. At this point, everyone expects the others to take on the chore, and consequently, no one fetches water despite their thirst. One night, a scrounging rat knocks over a candle holder, leading to a devastating fire in the temple. The three desperate monks finally unite and mount a concerted effort to put out the fire. By the end of the ordeal, they recognize the importance of unity and begin to live a harmonious life. The three monks create a pulley system to fetch water, allowing the three to work together with ease. The temple never lacks water again.