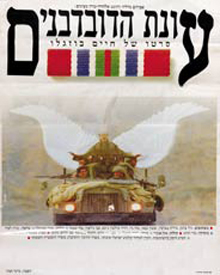 Miki is a yuppie advertising copywriter from Tel Aviv called up to do reserve army duty in Lebanon during the war’s closing days. Miki has strong premonitions of his death, which are magnified when he learns he has been chosen by Joanna, an American TV reporter, as the star of her TV special about the war. Together, the reserve unit and TV crew embark upon a strange tragi-comic journey through the war zone, encountering booby traps, bombs and snipers, though they never really know who the enemy is. The insanity of the situation spills over into a succession of surreal, often absurdly funny events. Certain that he will be killed, he treats his reserve duty like an ad campaign with an American reporter attached to his unit. The pressures of the war, as well as with the reporter, slowly wear Mickey down and between his vanity and her hot temper, a lot of conflict gets generated on the way to their becoming lovers.  Time for Cherries does not hesitate to point political fingers at those responsible for the Israelis’ presence in Lebanon, but remains poignant and humanistic throughout.