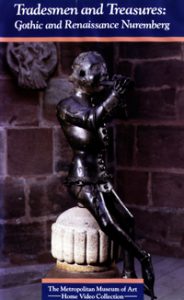 Filmed on location in Germany, Tradesmen and Treasures documents the remarkable flowering of art and culture in Nuremberg during the 14th-16th centuries, when the city evolved from an important Late Gothic city within the Holy Roman Empire to a Renaissance center whose artistic, humanistic, and scientific achievements had far-reaching consequences.  The film features splendid location photography of the city’s castle, towering churches, and private residences, and works by such artists as Veit Stoss, Adam Kraft, and Albrecht Düret.  Interviews, period music, and travelers’ accounts bring to life the great artists, the shrewd merchants, and the patrician families who made Nuremberg into one of Europe’s great cities.  (In English)