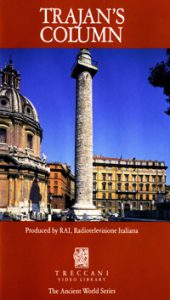 In the year 113 A.D., Roman Emperor Trajan victoriously concluded his two campaigns against the ancient inhabitants of Romania, the Dacians.  To celebrate this sensational and dramatic feat, Trajan erected a gigantic marble column.  In the 600 feet of its spiral band the campaigns’ episodes unfold without any formal division between them, creating a sculptural motion picture.  Trajan’s column ranks among the most famous monuments of all time: a unique example of both classical art and political propaganda.  This video pans over the splendid frieze and illustrates in minutest detail the daily social life of the Romans and of their “barbaric” opponents; it offers unparalleled information about road and bridge building, and gives an irreplaceable insight into Roman military struggles at the borders of the Empire.  Comparisons are drawn between the column and other monuments it has inspired through time, such as the Column of Place Vendome in Paris, erected by Napoleon to celebrate his own victories.  Finally, the video discusses the various dangers of Trajan’s Column’s continued survival and remarkably presents the problems of its restoration.