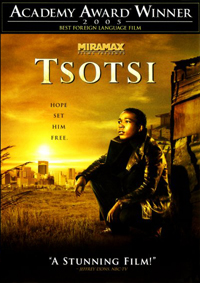 A South African hoodlum named Tsotsi (Presley Chweneyagae) lives by a code of violence, and he and his gang of thugs prowl the streets of Johannesburg day and night, attacking those who fail to give them what they want. After casually shooting a woman and stealing her car, he discovers her baby in the back seat. Instead of harming the mewling infant, he takes it home and cares for it. The child acts as a catalyst for the hardened thug to regain his humanity.

How strange, a movie where a bad man becomes better, instead of the other way around.  Tsotsi, a film of deep emotional power, considers a young killer whose cold eyes show no emotion, who kills unthinkingly, and who is transformed by the helplessness of a baby. He didn’t mean to kidnap the baby, but now that he has it, it looks at him with trust and need, and he is powerless before eyes more demanding than his own.