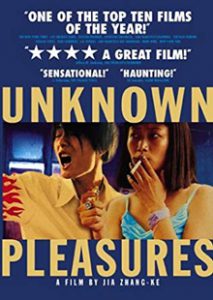 Unknown Pleasures follows three disaffected, aimless young people in the industrial city of Datong in China’s Shanxi province throughout 2001. Nineteen-year-old Bin Bin (Zhao Weiwei) lives with his mother, an adherent of the Falun Gong, in a small apartment near Datong’s textile mill. Bin Bin’s best friend, the reckless Xiao Ji (Wu Qiong), lives in an even smaller apartment with his father, and spends his time riding his motorbike around the city. The two friends eventually meet Qiao Qiao, a young singer and dancer working for the Mongolian King Liquor company as a spokesmodel. Xiao Ji immediately becomes enamored with Qiao Qiao, which gets him in trouble with Qiao Qiao’s boyfriend, the loan shark and local thug, Qiao San (Li Zhubin).

These two unemployed slackers, neither with job prospects nor motivation, try to make sense of their aimless and uncertain futures. As youths, they struggle for individual freedom and the social responsibility that comes along with it, but as part of the new “Birth Control” generation, fed on a steady diet of popular culture, both Western and Chinese, they represent a new breed in the People’s Republic of China, one detached from reality through the screen of media and the internet who have trouble resisting the temptations of the Western world.