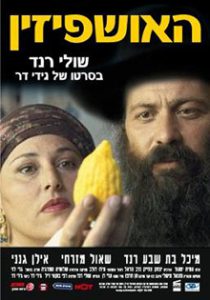 Moshe (Shuli Rand) and Malli (Michal Bat-Sheva Rand), an Orthodox Jewish couple in Jerusalem, are childless and without means to celebrate the weeklong holiday of Succoth. After much prayer, they receive unexpected money, and Moshe is told about an abandoned shack where he and Malli can properly deprive themselves and receive guests. However, they are visited by two ex-convicts with an unexpected link to Moshe’s past, and the celebration becomes a series of emotional trials.

Powerful, touching and amusing, the Ushpizin is a heartwarming and soul-stirring film.  Big-hearted Moshe Bellanga (Shuli Rand) is down on his luck, so he and his loving wife Malli (Michal Bat-Sheva Rand) pray passionately for a miracle.  Their prayers are answered…in the form of a large sum of money that mysteriously lands on their doorstep.  But the great “gift” leads to the arrival of two uninvited  guests (ushpizin), and Moshe and Malli are left wondering…have they found God’s favor or is this just a test of their devotion?