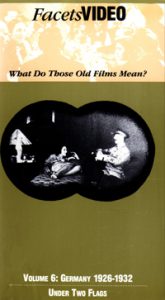 What Do Those Old Films Mean? was originally a six-part series that aired on England’s Channel Four Television. The series was conceived by Noël Burch. It explores the early days of film in six different countries – Great Britain, the US, Denmark, France, the USSR and Germany from a historical, social, political and cinematic perspective.

This volume (6) of What Do Those Old Films Mean? focuses on films produced in Germany in the ’20s, rarely shown or discussed today.  But influenced by the achievements of the young Soviet cinema, the German social workers’ movements created the German Workers’ Film. Among these early productions were such landmark films as The Other Side of the Street, Our Daily Bread, Mother Krausen’s Journey to Happiness and Kuhle Wampe. This remarkable movement for a “populist” cinema in Germany of the Weimar Republic had much in common with similar efforts in other fields of the arts–for example, the art of Kathe Kollwitz. But it was ultimately replaced by the more palatable–and cheerful–films of Billy Wilder and Robert Siodmak, and, ultimately, by the victory of Nazism.  (In English)