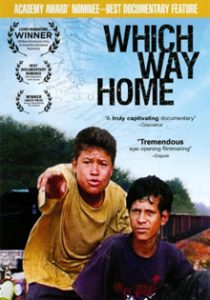 “Which Way Home” is a feature documentary film that follows unaccompanied child migrants, on their journey through Mexico, as they try to reach the United States. We follow children like Olga and Freddy, nine-year old Hondurans, who are desperately trying to reach their parents in the US.; children like Jose, a ten-year old El Salvadoran, who has been abandoned by smugglers and ends up alone in a Mexican detention center; and Kevin, a canny, streetwise fourteen-year old Honduran, whose mother hopes that he will reach the U.S. and send money back to her. These are stories of hope and courage, disappointment and sorrow. They are the children you never hear about; the invisible ones.