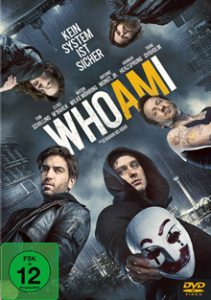 Benjamin (TOM SCHILLING) is invisible, a nobody. This changes abruptly when he meets charismatic Max (ELYAS M’BAREK). Even though they couldn’t seem more different from the outside, they share the same interest: hacking. Together with Max’s friends, the impulsive Stephan (WOTAN WILKE MÖHRING) and paranoid Paul (ANTOINE MONOT), they form the subversive Hacker collective CLAY (CLOWNS LAUGHING @ YOU). CLAY provokes with fun campaigns and speaks for a whole generation. For the first time in his life, Benjamin is part of something and even the attractive Marie (HANNAH HERZSPRUNG) begins noticing him. But fun turns into deadly danger when CLAY appears on the BKA’s (Bundeskriminalamt, Federal Criminal Police Office) as well as Europol’s most wanted list. Hunted by Cybercrime investigator Hanne Lindberg (TRINE DYRHOLM), Benjamin is no longer a nobody, but instead one of the most wanted hackers in the world.