Why We Fight: WW II – The Battle of China & War Comes to America 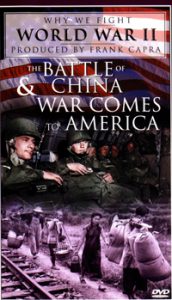 The Battle of China

The final film of the series follows the gradual shift of opinion from isolationism to support for the war, and spotlights Edward R. Murrow reporting from a blitzed London and Charles Lindberg arguing against helping England. (66 min.)