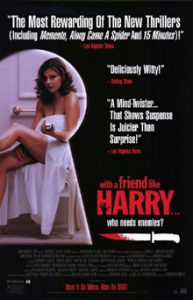 Michel, his wife Claire and their three little daughters Jeanne, Sarah and Iris are traveling to their cottage in Switzerland to spend summer vacation. When they stop the car, Michel goes to the toilet and a man stares at him. Soon the man introduces himself as Harold “Harry” Balestoro, who studied with Michel in high school and knows him very well. When Michel and his family go to their car, Harry parks his Mercedes Benz and introduces his fiancée Plum to the couple and invites themselves to travel to Michel’s house for a drink. Later her recalls by heart a poem written by Michel and shows that he was obsessed for Michel. Harry is surprised that Michel does not write anymore and tells that he is wealthy since he has inherited his father’s investments. Michel and Claire are middle-class and are still repairing their cottage by themselves. Harry and Plum stay for the night in the guest room and in the morning, Harry gives a 4×4 V6 Pajero to his new friends. They do not accept but …