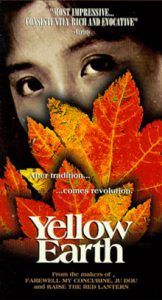 ‘Yellow Earth’ focuses on the story of a communist soldier who is sent to the countryside to collect folk songs for the Communist Revolution. There he stays with a peasant family and learns that the happy songs he was sent to collect do not exist; the songs he finds are about hardship and suffering. He returns to the army, but promises to come back for the young girl, Cuiqiao, who has been spell-bound by his talk of the freedom women have under communist rule and who wants to join the Communist Army.