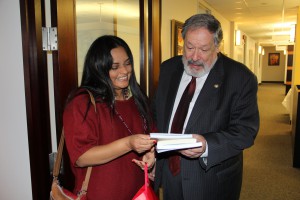 Abigail McCallister-Guerrero was invited to meet with the Ambassador of El Salvador to the Organization of American States in November 2014. The purpose of her meeting was to discuss her recent literary production, the bilingual version of her poetry, Cuentos para beber con un huacal de atol shuco (Stories to Drink with a Bowl of Shuko) as well as to brainstorm new approaches for future work. These ideas included the possibility of working with the Salvadoran cinematographer André Gutfreund, of authoring a testimonial novel on the journey of undocumented Salvadorans to the United States, as well as the possibility of putting Ms. McCallister-Guerrero in contact with other Salvadoran writers and artists who reside in the Washington area and the rest of the United States.

Others present included her husband Dr. Richard McCallister, whose recent book on Central American women poets was well received by the Embassy due to its use of cutting-edge literary theory and its emphasis on viewing Central America as a unified yet diverse cultural region.

This entry was posted in Polyglot, Student Awards and tagged Fall 2015 Polyglot, Spanish.