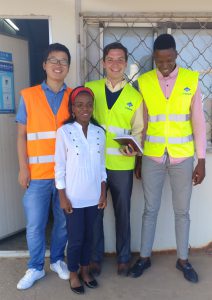 This past winter I travelled to South Africa to interview Chinese migrants for my senior thesis. As I approached a Chinese store owner to make conversation, I tried to think of a question to ask him. When nothing came to mind, I blurted out in Chinese, “Do you have any peanut butter I can buy?” His response was anything but welcoming as he began shooing me out of his store, telling me he didn’t need my service. As I stood outside the store in embarrassment, I realized that I had mispronounced the Chinese word for “buy” and used the wrong tone, thus asking if I could sell peanut butter, not buy it.

Embarrassed was the feeling. Growth was the result.

Over the past five years, as I have struggled, and at times succeeded, in learning the Chinese language, I have become comfortable with being embarrassed. Whenever anyone asks what studying Chinese is like, embarrassment is the first word that comes to mind. I cannot recall how many instances I have spoken in error, said something I did not intend to, or stood speechless because I did not have the vocabulary to respond in Chinese. And I would not change any of it.

The embarrassment experienced while learning a language has inculcated within me the ability to “get comfortable being uncomfortable” as the personal trainer from the Biggest Loser, Jillian Michaels says. During my time at UD, I have started a non-profit, run across the country three times, jumped out of airplanes at US Army Airborne school, travelled alone to Zimbabwe and Mozambique, hiked some alps in Switzerland, and been lost in China. Through it all, I never worried, and I attribute that calmness to the lessons learned while studying a language and the understanding that I am not always going to know quite what to say.

A language is not merely a different way to talk; it is the doorway to empathy, the path to understanding how another culture thinks, feels, communicates, and functions. Learning a language is not simply memorization, it’s a journey into the historical intricacies of a people group; it’s an opportunity to make another feel welcome because you took the time to understand how they speak. Learning a language is vulnerability. As I often struggled to express my feelings and thoughts in Chinese, I displayed my ignorance to native speakers, and as a result, opened my desire to learn from them. Most importantly, my struggle to understand the language forced me to listen, and not just listen to respond, but listen to understand.

When I listen to a native Chinese speaker, I concentrate on every word and facial expression in hopes of deciphering everything being said, and it makes me think: what if I listened to everyone I spoke to with the same intensity? What if I gave my friends the same undivided attention when they spoke instead of glancing at my phone? What if people focused on every word said by someone they disagreed with, not to refute their statement, but to understand their point of view?

It would drastically impact the space between us. Two people and cultures do not have to be geographically distant to feel separate, and in the same manner, two cities that are geographically close are not necessarily close friends. That is because the distance we feel between other humans is not bound by geography, but by empathy. Those who empathize with us, and relate to us, are those we hold in the highest regard. Most importantly, they are the people we trust the most.

As I move into my career, trust is of the utmost importance. On the day I graduated this year I commissioned as a Second Lieutenant into the US Army. As an infantry officer, I will serve as the forward-most ambassadorial arm of the United States. Decisions made by US leaders will have an impact, but the relationships I and my platoon create with the locals where I am deployed will leave lasting impressions about how the US is perceived. I chose to study language because I will fail as an Army officer if I do not understand empathy, trust, and cultural diversity. I could understand the most intricate math or the newest scientific development, but at the end of the day, the interaction between people, and the legacy left by people, are what remains engrained in our minds. That interaction is driven by language and the ability to communicate, and the ability to be vulnerable and create an opportunity for trust to be built is discovered through studying a foreign language.

After that shop owner in South Africa shooed me out of his store, I took a deep breath and walked right back in. I tried again. With a bit of struggle, I explained the confusion and the experience resulted in an hour-long discussion about his journey from Taiwan to South Africa thirty years ago. The study of language gave me the ability to accept embarrassment and turn it into an opportunity for growth.