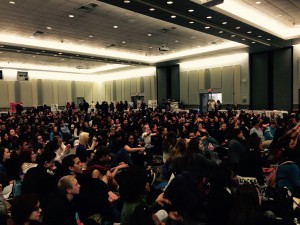 On Wednesday, March 25, 2015, five hundred-ten high school students attended the annual Journée de la Francophonie celebration at the University of Delaware.  During this day-long event, area high school students as well as a group of French exchange students from Fontainebleau conversed, danced and learned about French cultures from all over the world.  To facilitate this interaction, University of Delaware students had prepared poster presentations of various Francophone regions.  As the high school students visited each region and conversed with UD students, the UD hosts stamped the visitors’ ‘passports’ which were then entered in a drawing for French-themed prizes.  Both the high school and university students had positive reactions to the events of the day.  University students were particularly pleased to have had the opportunity to converse with native speakers from Fontainebleau, while high school students were happy to have interacted with their UD hosts.  One of the most popular regions was Cameroon due to the authentic Cameroonian dress of one UD host as well as an authentic Cameroonian soccer jersey. 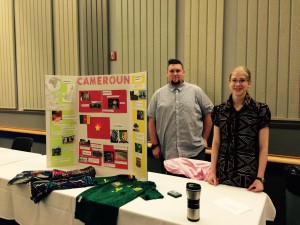 A highlight of the event was the Afro-Caribbean dance lessons led by dance instructor, Ms. Dee Faison.  Hundreds of students eagerly participated as Ms. Faison taught students the history, meaning and execution of particular dances. 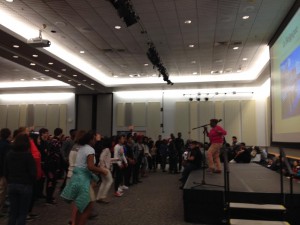 Five schools chose to perform on stage, singing French songs, performing French dances and reciting French poems and fables.  Student response to the performances was extremely positive.  Overall, student and teacher response to the day’s events was enthusiastic as evidenced by the email messages received after the event.

This message came from the President of the Delaware chapter of the AATF.

What a great day! …Teachers, thank you for making the necessary arrangements to bring your students.  The performances were a hit; my students have not stopped talking about Glasgow’s rendition of Alouette!

Other messages from the teachers echoed the above sentiment:

It was great to see some of you yesterday at Francophone Day at UD.  It was a very well attended event and the student performers did a great job!

Today’s event was terrific!  My students really enjoyed it.  And judging from all the other groups there, so did all the other schools! 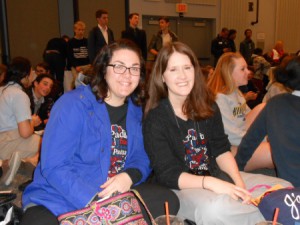 Susan (Fitzpatrick) Burris (on left) and Megan (Crossan) Boyle, French teachers at Padua Academy, both UD BA and MA grads of DLLC, who accompanied their students to the event

This entry was posted in Other, Polyglot, Special Events and tagged Fall 2015 Polyglot, French.