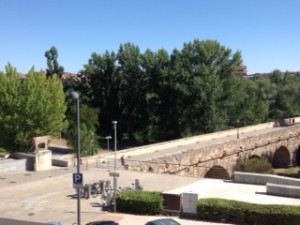 The mix of the old and the new is manifest in this picture taken on the 2015 summer program in Salamanca, Spain. It depicts the Puente Romano (Roman Bridge), built in the first century (AD) under the auspices of the Roman Emperor Trajan. The toro-verraco (granite bull megalith), quoted in the 16th century picaresque novel, Lazarillo de Tormes, is even older. This stone megalith is pre-roman and was built sometime between the fourth and the first century BC. But right next to yet outside of the scope of this picture is a twelfth-century Romanesque church… and a twentieth-century skate park!

Sixteen students participated in the Salamanca Study Abroad 2014 program. They took language, literature and culture classes in the same ancient (but fully modernized) classroom that were home to famous Spanish thinkers like Fray Luis de León and Miguel de Unamuno. All sixteen participated in excursions to Barcelona, Granada, Toledo, and Burgos with other Universidad de Salamanca students from Spain and around the globe.