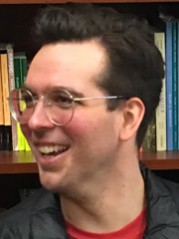 Andrew McClellan’s research explores the intersections of war, violence, death, and burial rites in Latin epic poetry and Roman society. He combines literary analysis with rigorous philological examination, and his work is informed by a broad cross-cultural appreciation of these themes in Western culture. Among his major research and teaching interests, Professor McClellan is particularly enamored with the expanse of Latin epic poetry from Ennius’s Annales to Prudentius’s Psychomachia, as well as Homeric epic and the Cyclic epic tradition, Nicander’s Theriaca, and Quintus Smyrnaeus’s Posthomerica. His interests extend to the post-Classical reception of the bizarre, horrific, and grotesque in ancient literature, particularly in modern science fiction, comics, and film. In Spring 2016, he is teaching courses on the reception of Classical ‘horror’, and Virgil’s Aeneid.

Professor McClellan received his B.A. in Classics from Davidson College, and his M.A. and Ph.D., both in Classics, from The University of British Columbia. Before coming to the University of Delaware, he taught Latin at Moravian College.

This entry was posted in Uncategorized.