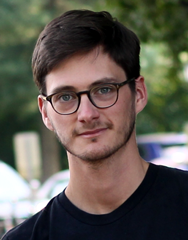 Aurélien Cavelier obtained a BA in English from the University of Paris 7 which included one year in Leicester (UK).  After his BA,  he worked in a high school as a French teaching assistant in Melbourne (Australia).  Then, he obtained a MA degree in American literature from the University of Caen and wrote his final year thesis on sound poetry.  At some point, he would like to pursue a PhD in French Literature.  His hobbies include traveling, acting, and choral singing.

Aurélien is an exchange student from Caen, France.