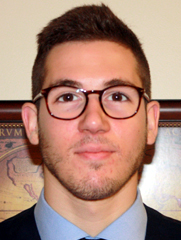 Quentin Bouvier is a graduate student from Paris, France pursuing an M.A in French literature. He got a B.A degree in 2015 from La Sorbonne Nouvelle, Paris III, with a concentration in Anglophone History and Literature. He has been a French Teaching Assistant from 2015 to 2016 at Hood College, MD. He is passionate about literature, history, politics, and loves sports. He also practices track and field, specializing in the discus. His plans are to pursue a Ph.D after his M.A and to become a French professor in the United States. La vie est belle, souriez !