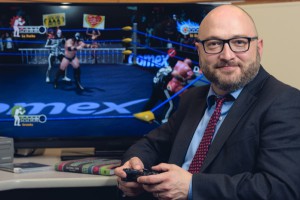 2:43 p.m., March 22, 2016–From ancient Aztec pyramids in the “Tomb Raider” series to 20th century paramilitary missions in Panama and Cuba in the “Call of Duty” franchise, Latin American settings and storylines have a big presence in video games.

And no wonder, says the University of Delaware’s Phillip Penix-Tadsen, author of the new book Cultural Code. Video games, he points out, are a multibillion-dollar industry in Latin America and studying them can provide insights into the culture of the region.

“I study the intersection of games and culture – how culture uses games and how games use culture,” says Penix-Tadsen, assistant professor of Spanish and Latin American Studies in the Department of Languages, Literatures and Cultures. “People tend to look at video games as entertainment, a way to relax and have fun, but they’re also used for a ton of other things, from educational purposes to political activism.”

The founding member of UD’s Game Studies Research Group, he focused his book on examples of game and cultural studies from Latin America. The research group was established in 2013 with support from the University’s Interdisciplinary Humanities Research Center and also includes faculty from such fields as communication, Japanese studies, English, art and computer science.

Penix-Tadsen says he grew up with the first generation of video games and casually played the most popular ones. As he worked toward his doctoral degree in Latin American cultural studies, and spent extended periods of time in the region, he began exploring the culture beyond its literature, expanding his scholarship to include films and video games as well.

“Games are socially impactful everywhere, and there is no shortage of examples in Latin America,” he says. “I look beyond the superficial setting and ask: How do these games produce cultural messages? What can they teach us about the culture?”

In the first section, “How Culture Uses Games,” topics include Latin American players, examining who plays video games, which games they play and where (cyber cafes, for example, are especially popular). The book also discusses how games can be instruments of persuasion and subjects of political controversy, as well as analyzing their economic and creative potential in the region.

In “How Games Use Culture,” Penix-Tadsen discusses semiotics, or the signs and images that are used in games to evoke or symbolize a culture or a group of people. Other chapters explore how video game designers make use of the environment and simulations of real people, such as the Chilean dictator Augusto Pinochet.

Reviewers have praised the book as thorough, well-researched and readable.

“Who would have guessed video games could shed so much light on culture, history, politics and current affairs?” wrote Rubén Gallo of Princeton University. “Cultural Code is a groundbreaking contribution to two fields: game studies and Latin American studies.”

The book’s “theoretical discussions on the representation of violence and the violence of representation make this study a must-read in the age of global terrorism,” Gallo added.

Other reviewers have noted that the Latin American video game industry often is overlooked by those focusing on gaming in the United States and Japan and have said that Penix-Tadsen has now helped put Latin America on the map for further research and attention.

“Today, Latin America’s growing contributions to game design, production and consumption are pushing it from the margins toward the center of the gaming world,” Penix-Tadsen says, calling the region “an ideal model of the shifting cultural terrain on which games operate in 21st century global society.”

This entry was posted in Faculty/Staff Notes, Polyglot and tagged Fall 2016 Polyglot, Spanish.