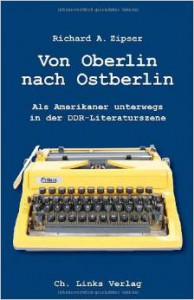 Rarely do students follow so neatly in their professors’ footsteps as I have been able to do. I took my first graduate independent study with Dr. Richard Zipser in the fall of 1987. Dr. Zipser had only recently taken up his position as Chair of the Department of Foreign Languages and Literatures at UD. He had come to Newark from Ohio after earning tenure and chairing the German Department at Oberlin College. I was a first-year MA student, somewhat unsure of my own purpose for studying German literature, and moreover, I had not yet spent any extended time in Germany. Through mentoring and teaching, Dr. Zipser helped me to clarify and pursue my goals. His unwavering support for study abroad made it possible for me to study and gain teaching experience in Bayreuth, both in winter-session programs and on a full-year’s exchange.

Now, much later, I chair the German Department at Oberlin and can offer ample evidence that Richard Zipser’s far-reaching scholarship, teaching, and administration have left a lasting mark on Oberlin, UD, and on our profession as a whole. Among his most outstanding legacies are the many East German authors whom he invited to Oberlin under the auspices of the Max Kade German Writer-in-Residence program. The tradition of (now former) East German authors at Oberlin is going strong. In the past several years, we have welcomed Uwe Kolbe, Irina Liebmann, Peter Wawerzinek, Susanne Schädlich, and Barbara Köhler.

By June of 2013, after fourteen years at Oberlin, including six years of chairing, I was convinced that I had a pretty good handle on international literary research and knew how to create rich opportunities for students to learn from living authors. Yet Richard Zipser’s “documentary memoir” humbled me and gave me an even greater sense of the risks and challenges he faced in building a bridge across hotly contested geopolitical borders. This unique book sheds light on the past and holds potential lessons for the future, offering valuable insights into Germanistik in the American academy and the enduring viability of academic and literary exchange.

Von Oberlin nach Ostberlin chronicles Dr. Zipser’s scholarship on East German literature, research that, to Dr. Zipser’s surprise, was monitored and scrutinized in over 400 pages of Stasi (secret police) files between 1973 and 1988. These secret records were made available to the public after 1991 by the Federal Commissioner for the Stasi Archives. Von Oberlin nach Ostberlin details the sweeping surveillance that pervaded East German life. Although this alone is not new information, it is nonetheless striking to learn that an American German professor was also so thoroughly targeted by intelligence operatives.

The book’s attractive layout features an excellent glossary of terms and abbreviations, necessary for keeping up with the complicated taxonomy of informants and sheer number of East German acronyms. Dr. Zipser offers his own contextualizing remarks in fonts different from those used for Stasi reports, and he inserts comments in square brackets directly into the reports, where necessary, to correct factual errors or to counter the most outrageous claims. He could not always resist the impulse to correct spelling and grammatical errors within the Stasi files: “Schließlich bin ich Lehrer” ‘I’m a teacher, after all’ (17).

Many entries reflect the efforts of informants to ascertain the purpose for Richard Zipser’s work in East Germany and determine his credibility. At the time, Dr. Zipser was an Assistant Professor at Oberlin. He was writing a survey of East German literature published during the cultural-political thaw following Erich Honecker’s assumption of leadership of the Socialist Unity Party. For his three-volume work, DDR-Literatur im Tauwetter: Wandel, Wunsch, Wirklichkeit (New York, Peter Lang, 1985), Zipser traveled frequently to the GDR and interviewed over forty-five publishing authors. The Stasi reports on this project make up the largest portion of Von Oberlin nach Ostberlin.

In addition to contextualizing commentary, Dr. Zipser generally lets the Stasi files speak –or  misspeak –for themselves. Stasi informants were apparently unconvinced that Dr. Zipser did not work for the CIA. The paranoia of the IM reports is palpable, for example, when Dr. Zipser’s manuscript is deemed “äußerst brisant” ‘utterly explosive’ (100) or when Dr. Zipser himself is characterized as a “Staatsfeind” or ‘enemy of the state’ whose “subversive” activities should be stifled (119). Informants report much consternation about Dr. Zipser’s funding sources and posit conflicting explanations for why he has taken more time than (they believe) American scholars typically receive to complete a book. Dr. Zipser surmises in retrospect that had he not received a prestigious IREX grant, he would likely not have received further visas to enter the GDR after 1978 (101).

His Stasi files detail his serious –and for the GDR, alarming –scholarship on such prominent writers as Christa Wolf, Sarah Kirsch, and Jurek Becker. Even early in his career, Zipser correctly judged that these GDR authors were producing works likely to earn a place in world literature. His good judgment is obliquely confirmed in Stasi files: Humboldt University literature Professors Eva Kaufmann and Frank Hörnigk were observed to regret that Richard Zipser was doing the work that they should be doing, but were not allowed to do (83).

Richard Zipser illuminates the contest between the GDR’s internal need for control and its efforts to present a positive image abroad. Von Oberlin nach Ostberlin reveals how the self-image of the GDR was propagated by countless acts of personal hypocrisy and opportunism. It is by now well known that many once-respected authors collaborated with the oppressive system by working as informants. It remains devastating to read so many examples of how callously they could cast aspersions on their colleagues and manipulate the truth for personal gain.

Von Oberlin nach Ostberlin is a deeply personal book, a record of a notable career. The files testify to Richard Zipser’s appreciation for and grasp of East German literature and accomplishments in bringing GDR authors to the United States. Dr. Zipser’s scholarship in East Germany required courage and commitment on his part and now testifies to the strength of East German authors to create literature within the regime’s oppressive confines. For these very reasons, the memoir sheds light on the security state in a world currently desperate for clear standards on privacy and the limits of surveillance.

Theater director and UD faculty member Heinz-Uwe Haus, himself a former citizen of the GDR, introduces the volume. Haus sees in it an antidote to mollifying recollections of East Germany that minimize the criminal, dehumanizing character of the totalitarian regime. Haus hopes that Dr. Zipser’s book will find its way into educational as well as into political discourses, and I agree that it should. In fact, I am currently using the book this semester at Oberlin with advanced German majors in my Senior Seminar: Legacies of East German Literature and Film. This may seem to some to bring Richard Zipser’s work “full circle,” yet I hope that instead of closing the circle, I can carry on the work he began and did so well, furthering dialogue that is open and true.

This entry was posted in Noteworthy, Polyglot and tagged Fall 2015 Polyglot, German.