Dr. Rachael Hutchinson to Serve on the International Selection Advisory Committee for the World Video Game Hall of Fame

The DLLC is excited to report that Dr. Rachael Hutchinson has accepted an invitation to serve on the International Selection Advisory Committee for the World Video Game Hall of Fame. She will be serving with other academics, journalists, and game industry leaders from around the world to determine the value of nominations and decide the new inductees to the Hall of Fame each year. Previous inductees include The Legend of Zelda, Doom, Donkey Kong, Halo, and Super Mario Brothers. Dr. Hutchinson recently gave the keynote address at the international Replaying Japan conference in 2017. Her address will appear in a bilingual book alongside the address from Tom Kalinske (CEO of Sega) and an in-depth interview with Uemura Masayuki, creator of the NES (Nintendo Famicom) console, and Ken Kutarai, the creator of the PlayStation. 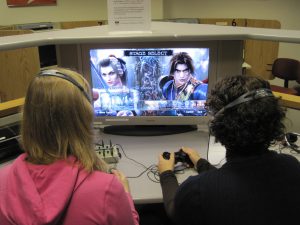 Dr. Hutchinson is a faculty member in the Japanese section and she is also a founding member of the Game Studies minor with DLLC’s Dr. Phillip Penix-Tadsen. Dr. Hutchinson also participated in the development University of Delaware Games Lab in consultation with Francis Poole and Meghann Matwichuk from Morris Library Instructional Media.

This entry was posted in Faculty/Staff Notes, Polyglot and tagged Fall 2018 Polyglot, Japanese.