The 2014 Summer Kobe program was directed by Ms. Mutsuko Sato and Mr. Eric VanLuvanee. The directors and their twenty-three students visited Nara during a homestay weekend. The students also traveled to Kyoto and Osaka with their language partners. 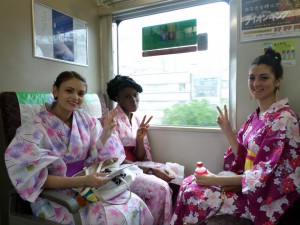 They visited Himeji city and castle during the Yukata (a light cotton summer kimono/pajama) festival, and had an optional trip to Hiroshima for the first time, visiting Miyajima Shrine and the Atomic Bomb Museum. Some cultural activities included naginata (a martial art involving a Japanese halberd, a blade at the end of a long pole), shodo (calligraphy), and sado, (tea ceremony). 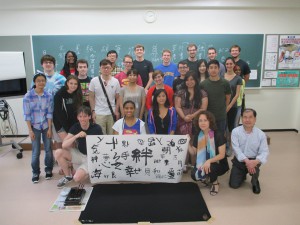 2014 Kobe UD students and their calligraphy 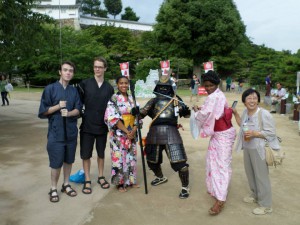 This entry was posted in Study Abroad Feature and tagged Fall 2015 Polyglot, Japanese.