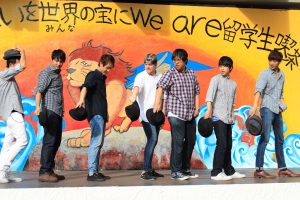 Having only seen and interacted with Japanese culture through classes, media, and the few Japanese students on campus, you can only imagine the overwhelming feelings I had standing atop Mt. Fuji, during midnight excursions around the temples in Kyoto, and seeing the Sakura cherry blossoms in the spring. The images I had only seen on television had suddenly become reality, and the three years of studying Japanese prior to going on this study abroad program had finally paid off.

I began studying Japanese during my second semester of freshman year at UD. I was very passionate about learning the language; in the three years leading up to studying abroad, I had skipped many classes up to the 400 level, and acquired JLPT N2 certification (the second highest language proficiency certificate) right before embarking on my journey to Japan. Therefore, my ultimate goal in Japan was not to just raise my language fluency, but to integrate into the Japanese society to learn and understand their perspective.  As a result, alongside taking regular classes for Japanese university students, I worked two part-time jobs, participated in many volunteer activities, and joined university club activities.

The initial transition to Japanese lifestyle was not simple, despite being able to speak the language. I quickly learned that just knowing how to speak would not entail perfect communication; there are many unspoken customs, and the overall expression of content in Japanese is very, very different from American English. Living in a dorm filled with primarily Japanese students, I was essentially communicating in Japanese 24/7. During the first few months, having not yet accustomed to the social norms in Japanese culture, I was frustrated by not being able to understand the feeling and thought process that Japanese people have when they speak. Often, when people learn a new language they find it difficult to be themselves when communicating. For example, many American jokes or sarcasm simply do not translate into Japanese and may actually be more offensive than humorous. With patience, constant engagement with all kinds of people and a desire to learn more, I was able to discover myself in the Japanese language.

Working at an English Language school as a private teacher was a great experience which helped me piece together the life and perspective that Japanese people have. At the school I taught many individual and group lessons. The students in my group lessons included students from age five to fourteen, and the individual lessons were often with a working adult or high school student. Depending on their language abilities, I taught in both English and Japanese, and we often conversed about our lives and their views on various topics. I learned about their day-to-day lives, what they were learning in school, their ambitions for learning English, and the difference between growing up in America as opposed to Japan. Often, the parents of the students would come to pick them up, giving me the opportunity to talk with them as well. I felt fulfillment every day being able to apply my language ability and knowledge to become a teacher and friend to the students.

Assimilation into a new culture and society was a long journey, with many ups and downs. Throughout my one-year study abroad, I made life-long friends from all different countries. I will never forget the moments we shared and obstacles we overcame together in our journey for growth as individuals.