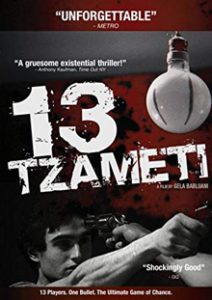 13 Tzameti follows 22-year-old Sébastien, a Georgian immigrant living in France and working construction jobs to support his poor family. Sébastien works on the home of Godon, a feeble morphine-addict who is under police surveillance. After Godon dies of an overdose, his widow informs Sébastien that she is unable to pay him. Sébastien then overhears the widow talking with one of Godon’s friends, describing a mysterious “job” that Godon had lined up before his death. The destitute Sébastien steals an envelope containing the instructions for the job. The police begin following Sébastien as he uses the train ticket contained in the envelope.  Following the instructions, the young man unwittingly becomes trapped in a dark and dangerous situation falling into a degenerate, clandestine world of mental chaos behind closed doors in which men gamble on the lives of other men.