A Forgotten Tune for the Flute 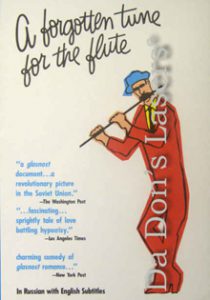 The film tells the story of a former musician who must make a hard choice between freedom with his mistress and a comfortable life with his wife. Previously, he was a student at the conservatory with a promising flute career, yet later became the husband of an important man’s daughter who made him a high-ranking bureaucrat and head of one of the units of the Main Directorate. One day Leonid Semenovich Filimonov feels a physical discomfort: his heart aches, and he is not even forty years old. This unpleasant malady provides him with the opportunity to meet Lida, a charming, spirited young nurse from the departmental clinic.  Leonid, who is facing a mid-life crisis, makes awkward advances toward her which become the start of a whirlwind romance.  He becomes flustered when his architect wife, Yelena, finds out about his affair.  The film is an enjoyable romantic comedy as well as a caustic satire on the bureaucracy of the post-Glasnost era.