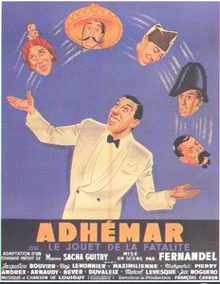 No matter where he goes or what he does, Adhémar Pomme finds that he cannot help being a laugh stock. The cause of his affliction is his distinctive appearance, namely his horse-like face. No one, it seems, can resist laughing at him, and this has made him not only unacceptable to civilized society but also miserable beyond words. Fortunately, a rich philanthropist has built a sanctuary for such unfortunate souls as he, a place that provides a safe haven away from the mocking masses for the deformed and disfigured.  After having worked as an undertaker, a theater prompter, a casino bouncer, and so on, and failing at each job, he applies out of desperation to this sanctuary where those rejected for physical reasons can hide and live together. But Adhémar immediately makes fun of the physique of his comrades in misfortune and is dismissed the very day after his admission. In the end, he ends up accepting his involuntary comic gift by becoming a clown in a traveling circus.