Art of the Western World From Ancient Greece to Post-Modernism 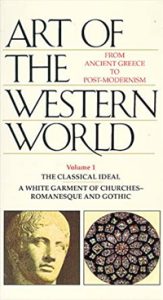 The Classical Ideal – Part I  Traces the origins of humanism and the immortal classical style to Ancient Greece.  Probes Greek art and architecture and studies the Parthenon.  Part II  Shows how the genius of Roman engineering and architecture was used to build an empire, while portrait sculpture exalted its rulers.

A White Garment of Churches – Romanesque and Gothic – Part I  With the fall of the Roman Empire, Christianity flourished with the Church as patron of monumental Romanesque architecture and sculpture.  Part II  The origin of Gothic architecture is found in the choir of the Abbey Church of St. Denis and the Chartres Cathedral serves as a model of High Gothic style.