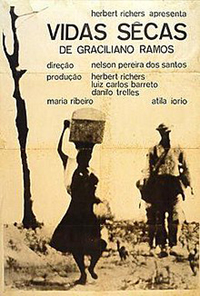 Based on a revered novel by Graciliano Ramos, this drama depicts the lives of a poor family in the dry northeastern region of Brazil.  Focusing on Fabiano and his wife, Sinha Vitoria, their two boys and cherished dog, the film follows them as they move around in search of work that will allow them to survive in the harsh, unforgiving environment. The movie is widely regarded as a classic of Brazil’s Cinema Novo movement.  The bright sun is a common theme throughout the film. On their journeys to look for a better future, the sun makes it very hard to continue walking and it dries up all of the water which represents life. Without it everything dies.