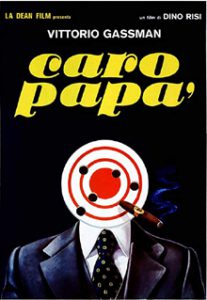 Vittorio Gassman plays a flint-hearted industrialist who thinks as little of destroying his business partner as he does of cheating on his wife. Gassman’s son is an apparently weak-willed lad, who may or may not have become involved in the “Red Brigade”. When Gassman learns that his son has been appointed to execute someone known only as “P”, he assumes the victim is his ex-partner.

Caro papá is really the story of the decadent lifestyle, and dysfunctional family, of a wealthy businessman. The director paints his portrait of the industrialist against a backdrop of an Italy where the new permissiveness has run rampant, traditional socio-cultural values have been usurped by consumerism, and the streets have become an open battleground for politically extremist groups (the ’70s were dubbed “The Years of Lead” due to the great number of terrorist acts, and politically motivated assassinations).