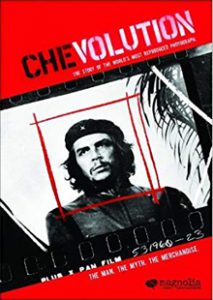 Chevolution is a 2008 documentary film which examines the history and legacy of the photo Guerrillero Heroico taken by famous Cuban photographer Alberto Díaz Gutiérrez. This image has thrived for the decades since Che Guevara’s death and has evolved into an iconic image, which represents a multitude of ideals. The documentary explores the story of how the photo came to be, its adoption of multiple interpretations and meanings, as well as the commercialization of the image of Ernesto “Che” Guevara.

Chevolution uses historic images and a multitude of artists, musicians, photographers, actors, academics, friends, fans, and acquaintances to explore the contrasting themes of “communism and capitalism, idealism and opportunism, art and commerce and how they have interacted and operated on the same materials during the past half century.”