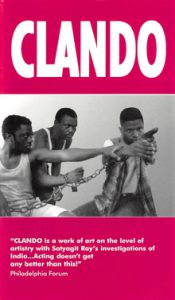 Clando is a 1996 drama film from Cameroon directed by Jean-Marie Teno.  Initially set in Douala, the film explores the experiences of Anatole Sobgui (played by Paulin Fodouop), a man who loses his job as a computer programmer and begins working as an unlicensed cab driver (or ‘clando’) who is arrested and tortured by a corrupt regime for printing anti-government leaflets. Left sexually and psychologically impotent by the experience, his life begins to deteriorate rapidly. He migrates to Cologne to find his former employer’s son, Chamba. Here, he falls in love with a local, a political activist named Irene, who convinces him to return home to Cameroon.

Clando addresses issues around migration and political violence in Cameroon, and sharply criticizes the authoritarian leadership.