Early Russian Cinema, Volume Ten: The End of an Era 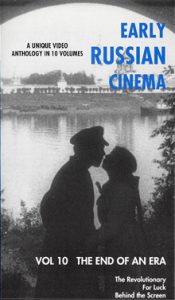 Traditional accounts of Soviet cinema have always stressed its difference from the the Tsarist period, implying that this earlier phase was actively hostile to social change. But The Revolutionary, released in April 1917, actually provides a link since its writer and star, Ivan Perestiani, went on to direct one of the few genuinely popular early Soviet classics, Red Imps. For Luck also marked a transition. It was the tragic end to the career of Evgeni Bauer, who died after an injury sustained on location for this film while it features an early appearance by the future pioneer of Soviet montage, Lev Kuleshov. The central scheme of the film — a daughter and mother both in love with the same man — and the extraordinary intensity brought to the final scenes show Bauer at the height of his subtle powers. Behind the Screen is no more than a fragment of the major two-part film by which time most of the personnel involved in it would have already moved south on their way into emigration. Its film studio setting, therefore, has a coincidental poignancy, a farewell to the Russian cinema by two of its greatest stars, Ivan Mozzhukhin and Natalia Lisenko.