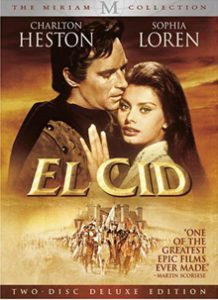 Spain is overrun by the Moors and the country’s only hope rests in a heroic knight known as El Cid (Charlton Heston). He knows a divided Spain cannot stand and implores his countrymen to unify in order to repel the invaders. But a hitch develops in El Cid’s campaign: He gets exiled from his homeland of Castile by the region’s power-hungry ruler. In the meantime, he attempts to reunite with his estranged wife, Jimena (Sophia Loren) — who’s still upset by the fact that he killed her father.