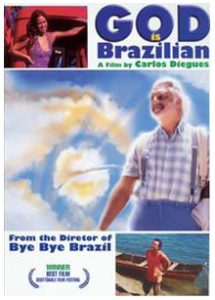 Taoca, a part-time fisherman and small-time con artist, finds a man holding on to a buoy in the middle of the ocean. The man claims he is God, but Taoca doesn’t believe him until he performs some miracles.  It seems that God has decided to take a break and is searching for someone to temporarily take over. With Taoca, God travels the country in hopes of finding a new saint who is fit for the job. Along the way, they meet a woman, Madá, who joins the two in hopes they will take her to São Paulo, where her mother has died.  Eventually, the trio comes across a young man who appears to have the right qualifications, except he has no belief in a higher power.