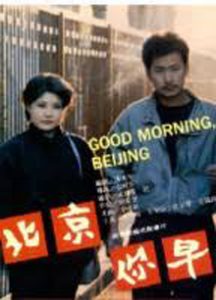 The story of two lovers during late 80s whose ordinary lives were disturbed by the pace of economic reform. causing a woman to leave her honest and hardworking boy friend, only to find herself falling in a trap set by an unemployed young man, posing as a “student from Singapore.”

Zhang Nuanxin’s 1990 feature, Good Morning, Beijing, helped to usher in a movement of urban realism in Chinese cinema: its main characters, a young woman and two young men who work on a bus, are vaguely discontented, adrift in a society that’s contemptuous of the old ways and easily seduced by Western materialism. Most of the film’s situations are as old as Murnau’s Sunrise (the corruption of naive youth by city slickers, etc), but Zhang uses the bus route to explore the low-rent enclaves of Beijing, taking us into ancient alleys and crowded, dilapidated homes. Though the drama never achieves the compassion of the Italian neorealists or the poetry of Bresson’s studies of disenchanted Parisian youth, it does offer a compelling honesty all its own.