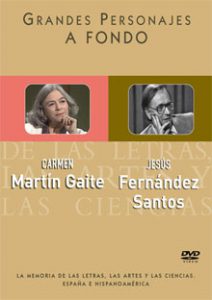 Grandes Personajes a Fondo: Carmen Martín Gaite, Jesús Fernández Santos is a video recording of interviews given to two well-known authors representative of the “fifties generation” in Spain:  Carmen Martín Gaite interviewed by Juaquín Soler Serrano in 1980, and Jesús Fernández Santos, winner of the Premio Nacional de Literatura for his novel entitled Extramuros in 1979.  Both authors discuss the literary influences that guided them as they developed their own literary voices and what their perspectives on literary achievement have been.  These interviews are both enlightening and inspiring, bringing with them new insights into the processes underlying literary art.