I Worked for Stalin 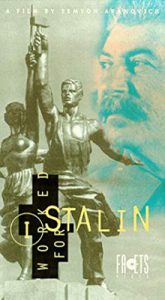 Combing through the eyewitness testimony of men who “ran” the Soviet state during Stalin’s reign of terror,  Semyon Aranovich charts their diabolical power games with often astonishing revelations about the individuals responsible for the fate of millions.  This controversial documentary created a storm in Russia by taking the cloak off a violent, repressive period of Soviet history. Filmmaker Semyon Aranovich even found the last surviving personal bodyguard of Joseph Stalin, Alexey Robin, who began working for the dictator in the 1930s, and his is a tale of cunning, betrayal and fear, creating a film which reads like a first-rate spy thriller. It is all the more remarkable because it is about real people and real events.