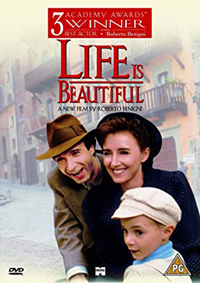 A gentle Jewish-Italian waiter, Guido Orefice (Roberto Benigni), meets Dora (Nicoletta Braschi), a pretty schoolteacher, and wins her over with his charm and humor. Eventually they marry and have a son, Giosuè (Giorgio Cantarini). Their happiness is abruptly halted, however, when Guido and Giosuè are separated from Dora and taken to a concentration camp. Determined to shelter his son from the horrors of his surroundings, Guido convinces Giosuè that their time in the camp is merely a game.

Guido explains to Giosuè that the camp is a complicated game in which he must perform the tasks Guido gives him. Each of the tasks will earn them points and whoever gets to one thousand points first will win a tank. He tells him that if he cries, complains that he wants his mother, or says that he is hungry, he will lose points, while quiet boys who hide from the camp guards earn extra points. Giosuè is at times reluctant to go along with the game, but Guido convinces him each time to continue. At one point Guido takes advantage of the appearance of visiting German officers and their families to show Giosuè that other children are hiding as part of the game, and he also takes advantage of a German nanny thinking Giosuè is one of her charges in order to feed him as Guido serves the German officers. Guido and Giosuè are almost found out to be prisoners by another server until Guido is found teaching all of the German children how to say “Thank you” in Italian, effectively providing a ruse.

Guido maintains this story right until the end when, in the chaos of shutting down the camp as the Allied forces approach, he tells his son to stay in a box until everybody has left, this being the final task in the competition before the promised tank is his. Guido goes to find Dora, but he is caught by a German soldier. An officer makes the decision to murder Guido, who is led off by the soldier. While he is walking to his death, Guido passes by Giosuè one last time and winks, still in character and playing the game. Guido is then shot and left for dead in an alleyway. The next morning, Giosuè emerges from the sweat-box, just as a US Army unit led by a Sherman tank arrives and the camp is liberated. Giosuè is overjoyed about winning the game (unaware that his father is dead), thinking that he won the tank, and an American soldier allows Giosuè to ride on the tank. While traveling to safety, Giosuè soon spots Dora in the procession leaving the camp and reunites with his mother. While the young Giosuè excitedly tells his mother about how he had won a tank, just as his father had promised, the adult Giosuè, in an overheard monologue, reminisces on the sacrifices his father made for him and his story.