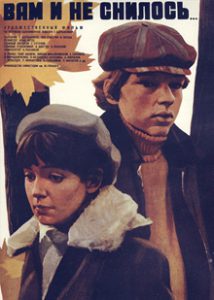 High school student Katya Shevchenko (Tatyana Aksyuta) moves to a new district and meets classmate Roman Lavochkin (Nikita Mikhaylovsky) at school. Gradually their friendship grows into love, which appears surprisingly strong to the adults around them. Roman’s father, Konstantin (Albert Filozov), was once in love with Katya’s mother, Lyudmila (Irina Miroshnichenko), who eventually rejected him. Roman’s mother, Vera (Lidiya Fedoseyeva-Shukshina), jealous of Katya’s mother, hates her and her daughter. In an attempt to separate the two children, she transfers Roman to another school and forbids them to meet. But the love between Katya and Roman does not diminish.  The only person that tries to help them is their teacher who has relationship problems of her own.