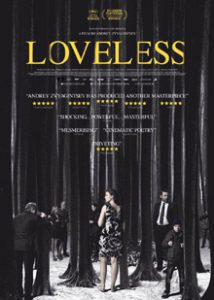 Still living under the same roof, Moscow couple Boris and Zhenya are in the terrible final stages of a bitter divorce. Under those circumstances, as both have already found new partners, the insults pour down like rain in this toxic familial battle zone, always pivoting around the irresolvable and urgent matter of Alyosha’s custody, their 12-year-old only son. Unheard, unloved, and above all, unwanted, the introverted and unhappy boy feels that he is an intolerable burden, however, what his parents don’t know is that he can hear every single word. As a result, when Boris and Zhenya finally realize that Alyosha has been missing for nearly two days, it is already too late.  Three years after his disappearance, on the wooded path along which Alyosha used to walk home from school, a strip of tape he threw onto a tree remains the surviving remnant of his existence.