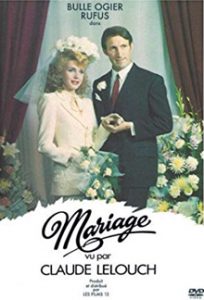 Four wedding anniversaries serve to chronicle the beginning and end of a thirty-year marriage, in this tragicomic French film by director Claude Lelouche, best known to U.S. filmgoers for his Oscar-winning film Henri (Rufus) and Janne (Bulle Ogier) are first seen on their wedding night as they hesitantly enter their new country house which faces a concrete bunker. They would really have preferred something in the city, but this is what they can afford. A resistance group overruns the house in order to take out the Germans in the bunker, and as a result of this raid Henri becomes forever associated with the resistance. On their wedding anniversary 10 years later (also the anniversary of the raid), he is regarded as a hero, though not by Janne; she boycotts the dedication of a plaque commemorating the destruction of the bunker. Ten years later, the couple is locked in serious marital combat. The final episode has the now-divorced couple reuniting briefly to sell the house, and Henri speaks of old times and ties that cannot be broken.