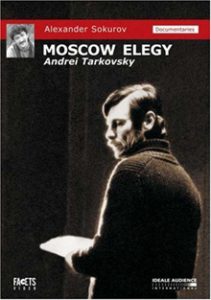 Moscow Elegy is a 1987 documentary film directed by Alexander Sokurov, about the later life and death of Soviet Russian filmmaker Andrei Tarkovsky. The film was originally intended to mark the 50th birthday of Tarkovsky in 1982, which would have been before his death. Controversy with Soviet authorities about the film’s style and content led to significant delays in the production.