No One Writes to the Colonel 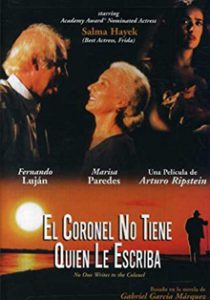 No One Writes to the Colonel is the story of an impoverished, retired colonel, a veteran of the Thousand Days’ War, who still hopes to receive the pension he was promised some fifteen years earlier. The colonel lives with his asthmatic wife in a small village under martial law. The action opens with the colonel preparing to go to the funeral of a town musician whose death is notable because he was the first to die from natural causes in many years. The novel is set during the years of “La Violencia” in Colombia, when martial law and censorship prevail.

Every Friday, the Colonel puts on his only suit and goes to the dock to await a letter announcing the arrival of his pension. But the townsfolk all know that this pension will never come. His wife also knows it, and even he knows it. But he is still waiting, living with the pain of the death of his son.