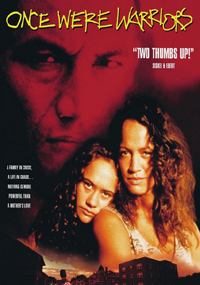 Set in urban Auckland (New Zealand) this movie tells the story of the Heke family. Jake Heke is a violent man who beats his wife frequently when drunk, and yet obviously loves both her and his family. The movie follows a period of several weeks in the family’s life showing Jake’s frequent outbursts of violence and the effect that this has on his family. The youngest son is in trouble with the police and may be put into a foster home while the elder son is about to join a street gang.  Jake’s daughter has her own serious problems which are a key element in the plot.  Grace, the Hekes’ 13-year-old daughter, keeps a journal in which she chronicles events, as well as stories she tells her younger siblings. Her best friend is a homeless boy named Toot, who lives in a wrecked car. She dreads a future she believes is inevitable and is constantly reminded of getting married and playing the role of a wife, which she believes comprises catering to a husband’s demands and enduring beatings. She dreams of leaving and living an independent and single life.   It seems that their only recourse is to return to their Māori village and traditions, hoping that their Māori heritage will give Grace the strength to resist her uncle’s advances and her father’s control over her.