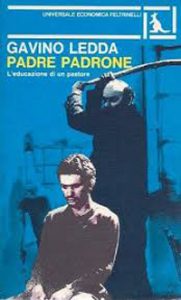 Padre padrone depicts a Sardinian shepherd who is terrorized by his domineering father and tries to escape by educating himself. He eventually becomes a celebrated linguist. The drama is based on an autobiographical book of the same title by Gavino Ledda. The title (pronounced [ˈpaːdre pa’drone]) literally means “Father Master”.  It has been translated as My Father, My Master or Father and Master.  The drama was originally filmed by the Taviani brothers for Italian television but won the 1977 Palme d’Or prize at the 1977 Cannes Film Festival.