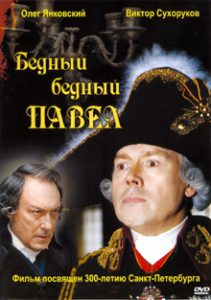 One night, a patrol rushes into the chambers of the Russian prince Pavel, son of the Empress Catherine.  The Empress has died, and Pavel is to be anointed the new Tsar. Thought to be feeble-minded at best and crazy at worst, Pavel soon lives up to his enemies’ fears.  He dismisses long-serving courtiers, demands that peasants only work three days a week, and declares that state officials should start their days at 5 am. Soon, it seems that everyone who can is trying to hatch some kind of plot against him, including his own sons. Sumptuously designed, Poor Poor Pavel constrasts the imperial splendor of the court with the sordid atmosphere of conspiracies and backstabbing that comes to define these characters’ lives.  This epic historical drama, shot in the interiors of the magnificent palaces of St. Petersburg, represents an unconventional view of the personality of the Russian Emperor Paul the First.  It shows him not as a tyrant, but as a living person with his own experiences, who sincerely strives to bring happiness to the country.